In a race against time, two soldiers must rush to stop an attack that will save the lives of 1,600 soldiers during World War I. Their adventure shows how gruesome and deadly World War I was. 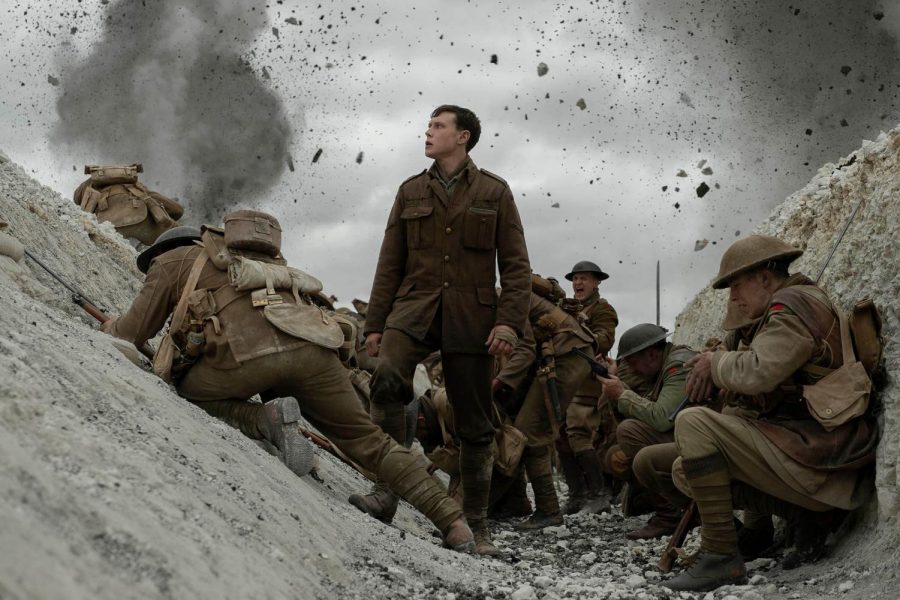 A little bit of backstory:
Sam Mendes  directed 1917. Known for directing Spectre and Skyfall, he recently received the Critics’ Choice Movie Award for Best Director, and the award for Best Direction of a Motion Picture. Sam Mendes got the idea for filming 1917 from his grandfather, who served in World War I. Like the characters in 1917, he was a “runner” who was assigned to carry out messages through the front line. The movie 1917 was based upon the war stories of Mendes’ grandfather and the duties of “runners” during World War I.
The Movie
The film opens up by showing us its two main characters – British soldiers Lance Cpl. Schofield and Lance Cpl. Blake. They are tasked with something that seems impossible to do. They must deliver a message that can save up to 1,600 soldiers, including Lance Cpl. Blake’s brother. They must cross enemy territory and deliver the message within a day’s time.

Bell High School students who saw the movie thought the idea of accomplishing this mission was insane. “The film overall was very cinematic,” junior Bryan Alfaro says, “but the idea of delivering a message to save that many lives in such a short period of time I thought that was crazy. The movie was very gruesome and showed just how evil war is, and the courage it takes to be in one.”  Those who have seen 1917 praise it for displaying the horrors of war and its dark side.

1917 depicts what other war movies don’t. The cruel moments in war, how deadly World War I was, how dark it was. One specific moment in the movie that demands attention by showing just how sinister war can be is when Lance Cpl. Schofield is being chased by Germans in enemy territory. He is running for his life to the point where he must jump off a ledge into a large body of water. As the strong water currents take him, he finds himself about to be dropped at the bottom of a waterfall.

When he’s dropped, he finds himself with dead bodies all around him – men, women and children all dead, surrounding him. The whole area is covered with dead bodies, making it hard for him to swim away to land. As soon as he finds land, he begins to cry, seeing the outcomes of war. This very powerful scene shows just how cruel and difficult war can be.  Watching people die, both women and children results in an emotional toll on the soldiers. This later traumatizes them due to the guilt of their actions.